Whither the recoil pad?

As a rule, the firearms industry thrives on better-mousetrap optimism.  Every year, thousands of products are put on display at trade shows in hopes of finding a distributor; some succeed and most disappear without a trace.  Many offer improvements in performance measured in percentages or fractions, and after a while, they all blur together and nothing seems like genuine innovation anymore.  We therefore admit guilt to the following: nobody at Calibre believed the claims about the Falconstrike recoil pad.  Is there really a new way to stick an inch of padding on the end of a gun?  We thought the search for recoil reduction had relocated to the muzzle end, and that it still didn’t work very well.

But not everyone gave up on finding a solution to the seemingly intractable problem.  Like so many aspects of this industry, sometimes you just need to put the problem in front of the right person.  In this case, that person was Martin Gaudet of Gaudet Compensating Dampers.  GCD, in addition to owning the Falconstrike brand, build industrial damping equipment, and their entire engineering and manufacturing business revolves around measuring, and defeating, unintended motion.

Enter the Falconstrike Recoil…Converter.  Yes, it’s a pad.  But this is the most intelligent pad we’ve ever seen.  There’s an outer rubber layer which is grippy and kind of stretchy, an inner layer of cohesive gel, and the whole thing is wrapped around one of Gaudet’s industrial dampers, although the padding around the damper is so thick it’s almost impossible to feel where it begins and ends.  It certainly feels squishy and comfortable, so naturally we took it to the range, downloaded an accelerometer app onto an old phone, and duct taped the phone to a Remington 870. 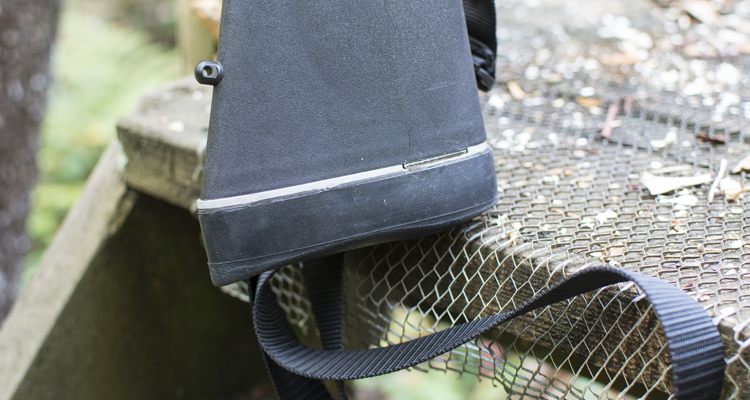 In retrospect, we should have taped the phone to something other than the receiver.  Also, the glass would have been safer facing outwards.

At any rate, what we can tell you is this: the claims Falconstrike makes about this pad are pretty accurate.  It eats recoil, better than any pad we’ve tried.  During the firing cycle, the gel balloons the rubber surround outward, and the damper deadens the impulse.  Why is it called a “Converter”?  It’s called a converter because the laws of physics prevent any device from deleting energy from the recoil, but there’s no reason that energy can’t be converted from motion into, say, heat.  That’s what the Falconstrike does: it uses some kind of space-age polymer which reacts to impact by getting warmer instead of bouncing.

The effect is astonishing.  The Falcon Strike genuinely does soak up impact like nothing we’ve tried.  True, its appearance is somewhat true to its industrial origins; true, the consistency is so squishy that some competitive shotgunners will find the feel a bit indistinct when trying for a truly repeatable shouldering.  But the recoil reduction is second to none.

With a street price around $200, buyers will expect performance that blows cheaper pads away.  But even after we tell you how well it works, we still think you’ll be surprised.

To purchase one of these recoil pads for yourself, go to the FalconStrike website today.

This article appeared on Calibre and was written by Geordie Pickard